… And what a life it would have been!  The V&A’s wonderful exhibition of ‘Ocean Liners: Speed and Style’ had it all. Such a beautifully put together exhibit charting the rise of the golden age of travel. Where the Art Deco styling was stunning, and the craftmanship was impeccable.

Built in a time when health and safety didn’t exist and engineers wore flat caps instead of hard hats, the shear scale of building these stunning floating hotels was phenonmenal. The ships were beautiful to behold from the magnificent scale of the exterior to the attention to detail within.

If you were lucky enough to travel on an ocean liner in its heyday, you were certainly in for a treat. (As long as you were travelling first class of course).

Winding our way through the displays of opulent furnishings and magnificent murals, we got a real feel for the decadence of cruise liner travel. We Ooo’d and Ahh’d our way through the museum, taking in the on deck pool replete with swimmers, to the treats you could have bought in the on board shop (including a rather beautiful clutch bag in the design of an ocean liner) – divine! 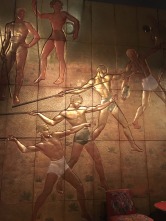 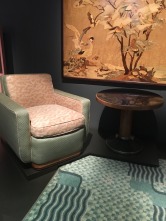 The Duke and Duchess of Windsor regularly crossed the Atlantic, along with a miriad of stars from the Silver Screen. Including none other than the magnificent Marlene Dietrich whose Dior suit is displayed alongside a film reel of the lady herself being photographed in it on her arrival to New York in 1950.

Beautiful travel trunks and flapper dresses on display, gave you a real feel for the era’s heyday, when ladies swept their way down magnificent staircases in elegant gowns, to drink cocktails and fine dine in the exquisite on board restaurants. 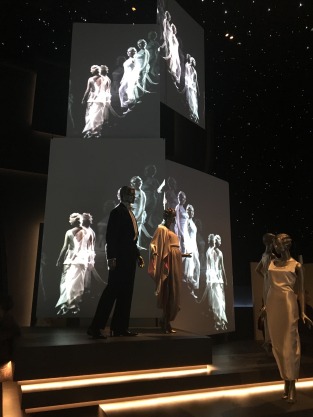 Even the children were catered for with on board nannies and first class playrooms.

This really was a very different time, when travel was not just a means to get from A to B, but a real adventure in itself, and an important part of the culture of social history.

When the Queen Elizabeth Liner  was re commissioned in 1967 as the QE2, everything changed. It had entered a new age of design. Although still a symbol of luxury, design preferences had modernised. Passengers wanted a more up to date  ‘space age’ look.  It had to evolve and move with the times, so out went the oppulence of the ‘past’ and in came a more sleek ‘ultra modern feel’

Lovers of mid century design can certainly appreciate this new era of style but for us, the decadence of the pre war cruise ships will always be our most favoured and coveted way to travel.

Click here for the link to the V&A webpage:

View all posts by thevintagetourists

4 thoughts on “A life on the ocean wave…”